END_OF_DOCUMENT_TOKEN_TO_BE_REPLACED

What does it feel like to come across the finish line of any race with the support of the race volunteers and spectators?   Personally it is a pretty good feeling.  What does it feel like with the support of fellow racers, family, and/or friends?  My emotions tend to be more positively charged, and to a much higher level.  Endurance sports tend to be a little lonely during races anyway, so the support level on the course may even be a determining factor on the outcome of an athlete’s personal race.  How do you feel when you have friends and family at a race versus when you don’t? 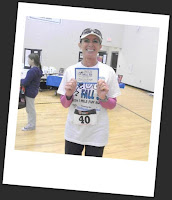 I had the honor of being support crew for two races this weekend.  The first was the culmination run for the last session of my Fit2Run 5k group.  The race was Saturday Morning, in Dunedin, at the Our Lady of Lourdes 5k.  I really enjoy having my students at these smaller racers.  Not only does it give them the experience of the race, but it also allows them the opportunity to stand on the podium.  This race, we had an age group winner within my circle.  To no surprise Linda Shutt again took 1st place in her age group even after being out for a small injury.

The course was a little tougher than I expected, but a good experience for my runners.  It was a trail run, that included soft soil, grass, and even sand, so for some of my runners these posed a couple of new challenges.   If you want to know the truth, the marking of the race was a challenge for me as I actually wound up lost on the course and ended up completing a 10k instead.  (Pause for laughter)  Luckily my girls, and Carl,  all came across the finish line smiling and a couple with Personal Records.  If you enjoy small races with a couple of small challenges, check out Our Lady of Lourdes Annual 5k Run.

On Sunday the first TriRock series triathlon was in Clearwater with the start and finish lines at Pier 60.  Overall, I thought the race was run very well, and seemed well organized for an inaugural race.  The weather was perfect in my opinion.  A little chilly in the morning, with it rising to just under 80 degrees by the finish of the race.  I had three Tri-Peeps running, Tanner Stevens, Cheryl Henderson and Jessica Glover.  This was to be Jessica’s first Olympic, so all of our eyes were on her, not to mention her positive attitude is completely intoxicating and endearing.  You may remember Jessica from my Jet City posting as she is the owner and operator of my favorite coffee hang-out.

The race has two distances an Olympic, or as they call it, Intermediate (1500m swim, 25 mile bike, and 10k run) and a Sprint (600m swim, 13 mile bike, 5k run).  All of my friends competed in the intermediate distance, because all of three of them are pretty experienced in all three events.  The race started with music from live bands which only enhanced the energy radiating from the voices of the announcers.  It was the typical mad rush for the athletes to setup their transition equipment, dawn their wet suits and head over to the swim start.  One of the announcers sung the National Anthem, and I was very impressed as it was sung acapella.  As a performer I understand how difficult a piece the Star Spangled Banner is and I was incredibly impressed with his version.   He sang with a bluesy undertone but with a rock attitude.  By the audience reaction I would say it was a success.  In my opinion it was at least better than Steven Tyler version during the AFC Championships earlier this year.

There were a few waves for each distance with the Sprint starting 15 minutes after the last Intermediate wave with the swim being an outer and inner loop.  The finishers did cross in some instances, but the finish line was wide enough to accommodate both.  I didn’t see any issues with transition as it was large enough to handle all of the equipment and runners of turf were actually put down for the athletes bare feet.  (Note to any Triathlon Race Directors reading:  This small detail adds a huge comfort to athletes.  Just sayin’.)  The entrances and exits were clearly marked and even with the two distances using the same course, there was not a lot of crowding.  As a spectator I did enjoy the run being an out-and-back south and then north as well.  I was able to see my friends twice on the run before the finish.

I didn’t explore too much, but the expo looked small, but loaded with great vendors, the beer tent was sponsored by Red Hook which is pretty decent, and the headlining band was an AC/DC cover band, which for me was perfect.  Being a child of the 80’s has it’s perks, obviously.

Overall , I was impressed with the event.  I actually wished I would have been able to compete in it, but I enjoyed being there to support.  Out of our little group we did end up with Tanner on the podium for third place in the 25-29 age group at a time of 2:24:16.  With a possibility of two IMs next year I do not believe I am going to be able to compete next year either, but if I have friends that decide to compete I will make sure to be here again.