END_OF_DOCUMENT_TOKEN_TO_BE_REPLACED

I made it to the front of the dock where handlers had signs up with our ages and waves on them.  I found my wave with ease and merged in the rest of the 40-44 males whom had last names that started with the letters I – Q.  Now is when the nerves started to build up in my stomach and all the insecurities started to show their pretty little selves.  “Did I train enough?”  “Why didn’t I do more swim workouts?”  “Why can’t I use a pull buoy?”  “Should I really use a wet suit?” and the most famous insecurity that comes up before a race; “What makes you think you belong here with all these athletes?”  I never can shake that one.  (Read my “About” page to find out why.)

Before I knew it I was at mile 3 wondering where the miles went, especially when my watch had me doing under 9 minute miles.  Of course I expected that to change as my body became a little more tired and I started to walk through the aid stations.  The run in Augusta is two loops around the center of town around Broad street.  It was loaded with spectators and I enjoy it.  Sometimes there is even some great signs that people make.  I have seen some funny ones, like “Toe Nails are for sissies” and “Chuck Norris never did an Ironman”, but my favorite to this day is still “If triathlon was easy they would call it football.”  That one always cracks me up.  Not that it is true.  Take it from someone who has attempted both American football the other football we call soccer, they both have there different definitions of tough.  Triathlon is just the endurance tough because it doesn’t stop for numerous hours, where in the other kinds of football they usually only last 2-3 hours and they have these things called “timeouts”.  In triathlon we don’t have timeouts, the clock doesn’t stop because you have a foul or a penalty.  It just keeps going.

The first loop went around Augusta went very fast.  Before I knew it I was in back a couple of blocks to the west passing the split where a sign was posted to keep left for the first loop or turn right if it was your second loop.  I remembered last year really disliking that sign, but this year not so much.

The crowds seemed to have grown on my second loop and I kept my eye out for Jessica who was sporting her bright yellow tank top and green hair.  It was supposed to be yellow as well, but unfortunately it didn’t work out that way.  I never did see her the whole run, but nevertheless the crowd cheered everyone on.  A couple of little kids were on the side holding their hands out and cheering hoping we would run by and give them a high five.  There were families out just hoping to get a glimpse of their sons, daughters, husbands, wives, mothers or fathers.  As I was running, my photographer’s eye kept seeing Norman Rockwell, paintings.  This really was a very clean, forthright city with an old soul.  I couldn’t help but smile a lot of the time, at least until mile nine.  I couldn’t believe it, the plan was working just fine but at that point, cramp, side stretch…ouch.  I forced myself to run until the mile 10 aid station where I walked and grabbed water and a cup of coke while breathing as deep as I could.  When the pain subsided a little, I started to run only to be struck down again by the pain.  I grabbed a gel packet and a salt tab hoping they would help and they did, for a short while until I arrived at the mile eleven aid station and ate an orange.  At this point, I didn’t care. I had 2.1 miles left and I wasn’t stopping.  If I had to leave my intestines on the sidewalk and pick them up later that’s what I was going to to.  I picked up my pace, blocked out everything and headed for the finish line.  I didn’t even see the mile twelve marker, but I felt the vibration of my watch which told me now I had just a little over a mile to go.  I kept looking down at my watch, 12.1, 12.24, 12.35.  I felt like this was the longest mile of my life, but I was wrong.  I finally made it to the split.  Left for the first lap and right to the finish and I was going right.  Here is what turned out to be the longest stretch of the run.  I had no idea that a quarter mile could feel like an eternity and when I finally did see the finish, I felt like I was in the movie; “The Shining”, when the little kid is looking down the hall and it keeps getting longer and longer?  That exactly what it felt like.  I looked down at my watch and noticed what it said 19:54.  Crud!  I wasn’t going to make it.  I lifted my legs and increased my cadence just hoping I could get one little ounce of speed and I got it, but just a little too late.

I crossed the line with the race clock stating 6:06:54, so doing the math my race time ended up being 5:36:54.  While I didn’t hit my goal of a 2 hour half-marathon I still crushed my previous year’s time by over forty-two minutes.  I was on cloud nine.  I couldn’t help smiling.  This really was one of the greatest races I ever competed in.  I take that back.  It was the greatest performance I ever had in a race, period.  Unfortunately, being the oldest in my group I was the first person to cross the finish line, except for Russ who passed me at mile 5, so there was no one to share it with. 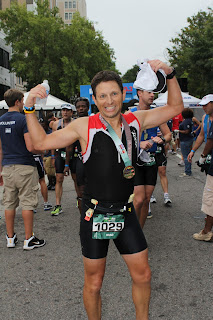 After receiving my medal, taking a couple of pictures and having my timing chipped removed from my ankle I  headed over to the refreshment tent a can of coke from this pool of ice and ran in to Russ.  He told me that he finished around 4:28.  This kid is a machine and that just proved it.  We congratulated each other and I went over and got a massage, but not before disposing of the first coke and grabbing a second.  While waiting I finished that can and by the time I finished up with Caroline, the LMT who took care of me, I felt like a million dollars.  With exception of a twinge in my back, which for me is normal due to my injury, I really felt good.  No pain, no soreness and due to the adrenaline still pumping from having such an awesome performance I felt like a rockstar, and I never really felt that way before.

Epilogue
I changed and called Amy and gabbed about the race.  She was proud of me.  The last two races she had trained me for didn’t turn out so well, so with this performance I felt like I validated myself in her eyes and in my own.  After hanging up I saw a text from Kim telling me how awesome I did and there was a voice mail from my Dad telling me congratulations as well.  I almost cried.  I felt the tears well up, but there was just too many guys around so I wasn’t about to let that happen.

As it turned out we all had a good race.  Celeste PR’d, Chris finished under 6 hours, Bruce beat me by one second, and as it turned out Russ actually took first place in his age group and was on his way to Las Vegas, but the story of the weekend was Beth.  Beth had gone through a lot just to get to the race.  Besides this being her first 70.3, she never biked really prior to this year, she had an injury that kept her from running for over 3 months, so she was very freaked coming into this.  Wouldn’t you know it, after having a goal of just finishing under 6:30:00, her official time was 5:47:16.  We were all really proud of her.  You can read all about her experiences on her blog Discom-BOB-ulated Running.

The rest is pretty boring.  We grabbed our bikes, and said our congratulations to the other athletes we knew as we walked out of transition  We packed up the cars, rode back to the hotel, cleaned ourselves up and headed out to Red Robin.  I don’t know if it was the race, or all the gel packets, electrolyte drinks, or just all the calories we burned, but I had a lettuce wrapped burger that I swear was the best I ever had.  Maybe I just felt like I actually earned it.
What I can say is this; this had to be one of the best experiences of my life.  I cannot only attribute it to my performance in the race.  Every piece of the puzzle fit.  I couldn’t have done it without the training, my friends, my coaching, the group that I coach, my family and all of the positive people I choose to surround myself with.  With one piece out of sync, it would not have been the experience it was.