END_OF_DOCUMENT_TOKEN_TO_BE_REPLACED

Last weekend I participated in the Paint Wars Mud Run in Oldsmar, Florida. Well, mud run is not necessarily an accurate term, most of it was just wet, but it was fun. The obstacles were more nature made with some added ropes for safety, some hay bales and of course paint.

When registering for the run I was taken in by the description of the race which was, of course, a little exaggerated. The paint was to be squirted by Paint Ninjas at a lot of different points in the course. I only came in contact with two, but the anticipation made it fun. Let me start at the beginning.

I drove into the Whispering Oaks Horse Ranch with my little Mini Cooper Clubman where a volunteer pointed me in the right direction of the parking lot. Thank goodness I was driving my little car, because I ended up having to make a spot down a dirt road, but it just added to the suspense of the run. Upon following the signs to the registration table, we, Sarah and myself, were told to sign a waiver for the property, ok no problem. As we made our way to the registration line however we were then told to sign a waiver, this time it was for the race. One waiver for the property and one for the race? Whatever. We then got into a line for the registration and goggle pick up. It didn’t seem all that long, maybe 10-12 people, but it took almost 45 minutes to get through it. When we finally had a names checked and were given a SWAG bag with two promotional flyers in it, we moved over to the t-shirt line where we gave the volunteer our sizes. The next words out of his mouth floored me. “That will be 38 dollars.” What? Really? For a cotton t-shirt? Yeah, thanks but no thanks buddy. We went back to the car to drop off our phones and bags and headed to the start. We did receive a decent introduction to the course, basically letting us know that there was a few river crossings where if we decided to take them, we should know how to swim, because the depth was not shallow. At that point, my progressive 4b friend Sarah and I, took off at a decent pace. 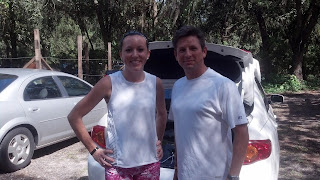 Sarah and I before the run

It started with a trail run for about 500 yards and then a dead stop to wait for an obstacle. A tree crossing where the tree was underwater. I guess a lot of people took there sweet time, but Sarah took it like it was not even there and I just a tad slower. (Sarah is about 18 years my junior, so give me a break.) The crossing ended with a steep climb both up and sideways, with the recent rain adding to dirt making it a little slippery. Sarah was nice to her old partner and waited up a bit. I didn’t fall but I realized my agility is a little less than I would like it to be. (I think I need to get back to boot camp. As a matter of fact all the way through this course I was thinking that.) The next couple of obstacles were through the trails over trees and up hills till we came to another stop. We actually couldn’t see why we were stopped until we reached the top of this hill that then returned back to sea level, but in the middle was a rope swing that dropped you off into the water where you then swam about 100m to the other side with a strong current that could definitely keep you from reaching the exit point if you didn’t have some sort of skill. I think I had just enough.

I will say I wore my New Balance Minimus’ during the race which didn’t hold much water, but I think I might have been happier with the five fingers. The minimus’ would be great for Tough Mudder where there isn’t a lot of hill climbs, but here I think I would have liked the extra traction my toes would have received, but I digress. 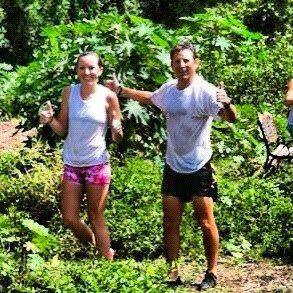 After the swim there was a nice trail run with only a couple of puddles and a few hay bale hurdles to include a run through the ‘WAR ZONE’. OOOOOHHHH….we thought we were going to get it bad, we actually wore white so we would get it bad, but…nothing. Not a single Paint Ninja anywhere. SOOOO disappointing. Oh well, we kept running and a real nice pace. Sarah is has ridiculous stamina and while I was right on her tail the whole time, I was starting to feel it, luckily we hit another line for another tree crossing. This one was elevated over the river. We crossed that with ease and headed through another long trail run, through the war zone again, and with the same result, no Paint Ninjas, right into the one and only mud obstacle where our shoes got muddy, and it sprayed a little on our legs, but that was it. We crossed the finish line and went to the beer line.

We got in line and saw that athletes were paying 3.50 and we both decided to forget it. We found the cooler with gatorade had a couple of dixie cups and headed back to the car.

Was it fun, yes, but I wonder was it because of the race or because I had a partner who was very enjoyable to run with. I am going to say the latter, or maybe a little of both. Sarah said this was her break from studying for the third test out of four for her CPA. Sarah if your reading this…thank you for inviting me, thank you for running I had a great time, and I really hope you were extremely successful on your test. 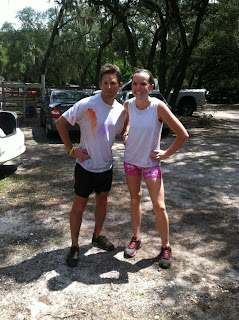