The human brain is an advanced computer that controls many different systems.  The body is like a room full of servers each independently managing a different system with one major system, the brain, as the master controller for all of them.

When the master controller has a difficult task to undergo, the systems will cluster together in order to complete the task as efficiently as possible.  If one of the systems begin to fail, it doesn’t mean the task will not be accomplished it just means another system will take over the lack of work.  The work may not be handled as efficiently, but nonetheless, it will be completed.

Only when the master controller issues a command to stop will the other systems desist what they are programmed to do.  The question would be “Why did the Master Controller issue the command?”

This long analogy comes right down to a quote I use all the time.  Internally, and with my client athletes.  “The mind will quit 100 times before the body does.”  Every excuse will come to mind while an athlete may be suffering, but it is the reason “why” they are challenging themselves that will override the mind’s command to stop.

In 2014, at the completion of the New York City Marathon, I said to myself, “Self, I am really happy I did it.  It was a tough race, in tough conditions (sub-40 degree temperature with 33 mph winds), but we did it.  It may not have been the time we wanted, but scratch the largest marathon in the world off the list.  I will probably not do this one again.”

My reasoning was the logistics of the race.

First, it is located in New York City.  That just says a lot of $$$ is going to be spent.

2) Getting around the big apple in a timely manner is difficult for someone not living there.

3) I have a lot of friends that live in the city and I want to see them, which means, more travel, meals and more $$$ spent.

5) In order to pack the corrals with 50,000 runners, it is required to be in the runner villages close to 3 hours early, and in sub-40 degree weather for someone from Florida is somewhat uncomfortable.

6) After leaving the finish line when the legs are burning and everything is getting stiff, it is another mile to get to checked bags and then another half mile to get out of the park where there are no cabs.  Then another 5 block walk to the subway.

Other than that the race is amazing.

This year, the reasons above meant nothing to me, because I ran this race not for me, but as a member of Team Tampa PKD for Erika Bragan, Jennifer Thomas and all of the other people affected by Polycystic Kidney Disease (PKD). 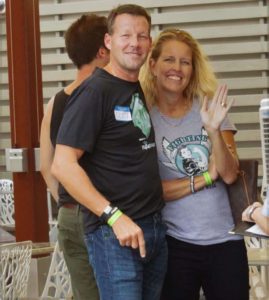 In 2009, Scott offered me a chance to run the Chicago Marathon for the Polycystic Kidney Disease.  At the time we were both in a boot camp class at a Lifestyle Family Fitness.  He mentioned it to a few others as well, so I brought up the idea of a team concept, where we could organize events to raise awareness and funds for PKD and then split up the money so everyone could reach their goal.  it actually worked for the 10 of us that competed that year, as we raised around $26,000 for the PKD Foundation. 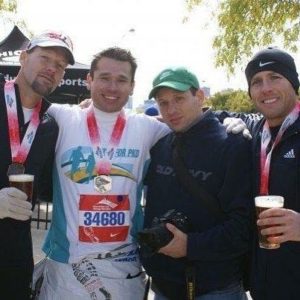 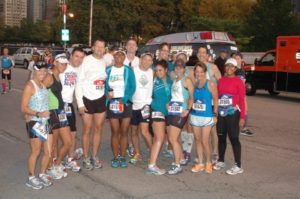 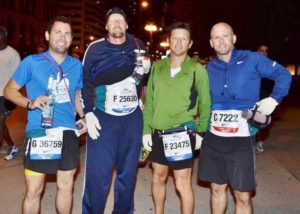 This year, we again signed five members.  Scott, Rich, Myself, Kevin, and Karen.  we raised over $25,000 again, but this year we also accomplished something else.  Over the last few years, Erika’s kidney functions were reduced to less than 5% apiece.  A normal human being can survive on 5% of one, but with PKD it is inevitable that the kidneys will fail. 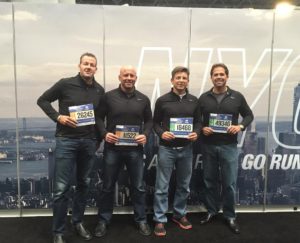 Erika had already been put on the donor list for over a year, but it had yet to pan out, so we added not only raising as much financial assistance for the foundation but finding a donor for Erika as well.

For over a year, Erika has been in pain, not sleeping and basically been in a state of misery.  Scott has recounted this for me numerous times, so when he said that it was time to start thinking about a transplant, I immediately asked him for the details to get tested.  I wanted to help any way I could and if it meant giving up a kidney so be it.

The Bragan’s waited to see if being on the donor list would pan out, but as Erika’s kidney functions continued to deteriorate, family and friends stepped up to be tested as donors.

I was tested as a kidney donor, with the preliminary tests proving positive, meaning I was a match.

However, the secondary tests diagnosed protein in my urine which is common in endurance athletes.  Unfortunately, for the medical staff, it is a risk for kidney stones which have a small probability to clog my ureter and if that was the case now, I would have another kidney to fall back on.  If I donated one, it could be fatal.

I was heartbroken when I found out, but I understood the reasons.

On July 10, my friend and Team Tampa PKD teammate, Rich O’Dea was on a blind date at the Imagine Dragons concert.  While getting to know each other Rich made mention of Team Tampa PKD, the marathon and Erika.  At first, it seemed a nonchalant question when she asked how to get tested, so Rich took as her just being nice, but even after she ended up returning to a long relationship, she still communicated with Rich she wanted to get tested. 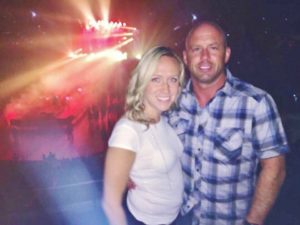 When I found out that Jennifer passed the second round of testing, I was absolutely ecstatic that she would be able to do what I and three other people could not.  I am still absolutely overjoyed that Erika will lead a longer more normal life and Scott, Madison and Spencer will continue to have their wonderful wife and mother.

While in an interview with ABC, Jennifer was asked why should give up her kidney for a total stranger.  Without skipping a beat, or even taking a breath she said, “Why wouldn’t I? The more important question should be, why is it so shocking that I would.”

I happened to be in the room when she was getting interviewed and I just about fell over.  Without trying to sound conceded, or take away any thunder from her, but I felt like Jennifer was someone who actually thought just like me.

Jennifer’s medical bills will be taken care of 100% by the Bragan’s insurance, but the recovery time may cause a little bit of financial hardship.

Of course, Team Tampa PKD is stepping up and hosting an event called Tailgate for a Transplant prior to the Tampa Bay Buccaneers vs New York Giants NFL Football game on November 8th at 1 pm.  (If you would like to help, but cannot make it to the tailgate please click here)