The title of the post is lending itself to a race report but I am going to step back a bit.  Wednesday morning around 6 am my phone started to vibrate.  Unfortunately, I missed it because I was in the pool, but after I finished my hygiene regimen, I grabbed my phone out of the locker and noticed it.  I knew whom it was from and what it said before I even looked at. 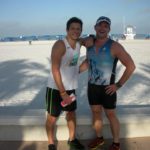 Pete and the Goof

Recently, Pete’s Mom, Noemi, has been dealing with a lot of complications from the brain tumor they operated on 23 years ago.  Over the last few months she has been in-between hospitals and rehab centers with pneumonia and other lung related issues, and finally last week she was taken to hospice in Dade City.  I made it a point to check-in on Pete, as often as possible and make a couple of trips to hang with him at the hospital or wherever just to give him and his family a sense of normalcy and support.   Wednesday morning, around 5:12 am her suffering finally ended.

Pete is a red-blooded American male in every sense of the word.  His does not show his emotions to just anyone, and even in his toughest times, he continues to care about other people.   The interesting thing is his family is pretty much the same way.   His Dad made it a point of finding me when I visited the Hospice Tuesday night to thank me.  Even though I knew this man was in a lot of torment, he smiled and kissed me on the cheek.   Pete’s Sisters are the same way.  Not a tear, not a drop of contentment, just gratitude.  This is what made this decision so hard.

The Best Damn Race was scheduled for Saturday, but the funeral for Noemi was on Friday and the viewing on Thursday.  I promised to help set up for the race, but something like this was not in the cards when that promise was accepted.  I really wanted to be there for my friend and his family, but I had no intention of disappointing Nick either.  Thursday morning, I made the phone call everyone I know dreads; disappointing a friend.  I called Pete and asked him how much of an ass he thought I would be if I missed the funeral.  I would be at the viewing, but I thought I would be of more use at the setup.  Without missing a breath, Pete told me to go set up the race and that if he had a choice, he would switch with me.  The advantage of being in this lifestyle allows for all of us to understand what it means to both train and staff a race.  The truth is; I would have said the exact same thing. 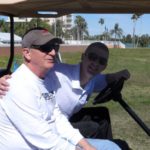 Nick and his Dad

Friday morning I drove up to the Safety Harbor Marina and saw an open field with a few tents being set up, a huge Budweiser Truck and a few guys marking the areas for different structures.  The day was filled with moving boxes, putting up tents and tables, running errands and just making sure Nick and the teams were supported.

Very quickly, the expo ramped up and was in full swing by noon.  It was amazing, to watch.  Not that I hadn’t seen it before, but I was never as close to it.  This was an idea hatched a little less than a year ago and here it was.  The finish chute went up, and the “Best Damn Race” Logo was everywhere and that is when it finally hit me.  This was real.  Nick had really made this happen.  Toward the end of the day, there were over 3000 runners registered, which is completely unheard of for an inaugural race. Nick, the vendors, the interns, the volunteers, and race staff were all in fast forward mode trying to get everything accomplished on time which to watch was nothing short of amazing.  It was like a well-oiled machine.  When Lisa, Ben, Ray and I finally decided to end the day and get some dinner, I was completely exhausted but exhilarated at what the next day was going to bring us. 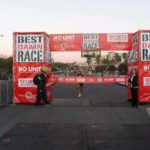 Nick and Beth holding the tape for the first finisher

I was so excited I ended with very little sleep that night, but I still had no problem getting up, showering, throwing on my running gear and getting out the door.  I had a few tasks Nick gave me to take care of before I headed over to the registration tent thinking that I would check with the volunteer coordinator to see if there was anything else before I started warming up for the half-marathon.  It turned out we were a few volunteers short, so I ended up going to finish line to help out after receiving a distress call from Beth.  This is why I was there.  Sure, I signed up for the Half-Marathon, but my first priority was to Nick and the race.  I ended up spending the whole day, handing out medals, and supporting the runners, so as much as I wanted to run, I had an amazing day.

I watched and hung medals over the necks of a ton of my friends as they cross the finish line, I had the opportunity to hold the tape for a few of the elites, I handed out and hung over a thousand medals, and just felt privileged and honored to be a part of it.

Were there a few hiccups in the operation of the race?  Of course, but Nick, and the race director Phil LeHaye resolved all of the issues seamlessly.   A year ago, I have to admit, I had my doubts.  I knew it could be done, but taking on this huge of a challenge and making it look as professional as it did, exceeded my expectations.  I am so proud of my friend Nick Zivolich.  What he was able to accomplish and all of the obstacles he overcame is nothing but inspiring. 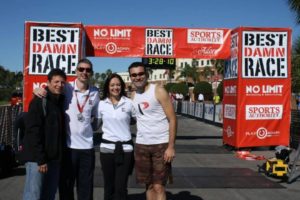 Nick and his Best Damn Girlfriend and Best Damn Friends 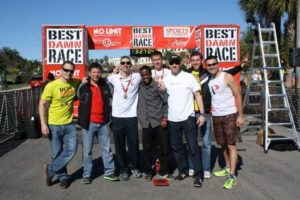 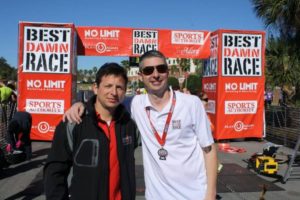 Nick and the Best Damn Goof